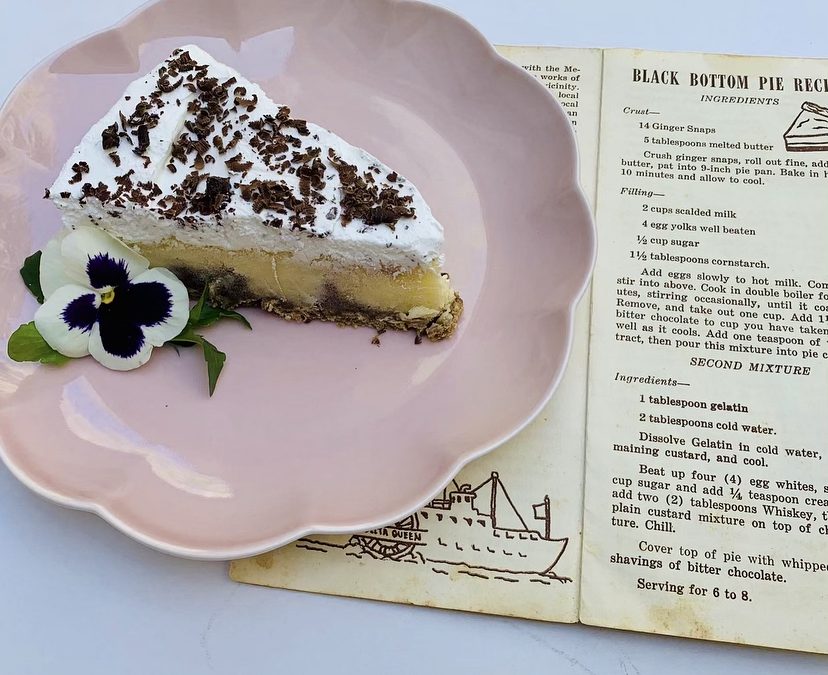 I got the sweetest letter from Mrs. Mary Davidson Jennings, a 92-year old reader originally from Kosciusko, who loves Mississippi and Mississippi Magazine. She enclosed a brochure published in 1952 about the history of Weidmann’s Restaurant in Meridian, the oldest restaurant in Mississippi. Wiedmann’s was first opened in 1870 by Swiss chef Felix Weidmann in the Union Hotel. In 1923, it moved to its present location and was owned by Felix’s grandson Henry Weidman. Several other changes in ownership have occurred over the years. Now in business for a century and a half, Weidmann’s is just as much a local favorite as it was when it first opened. Surviving since the late 1800s, the renowned restaurant has it all –historic atmosphere, an incredible past, and mouthwatering fare including their famous Black Bottom Pie, the recipe which was included in Mrs. Mary Davidson Jennings brochure. Enjoy!

Crush Ginger snaps in a zipper bag with a rolling pen until fine crumbs; add melted butter, and pat into the bottom of a 9-inch pie pan. Bake in hot (375-degree) oven for 10 minutes, and allow to cool.

In a saucepan over medium heat, scald milk by heating until a film forms on top but it does not boil; cool. Temper yolks with a small amount of milk, then slowly stir beaten egg yolks into warm milk a little at a time and stir to combine. In the top of a double boiler, stir together sugar and cornstarch. Add milk and egg mixture to sugar. Cook in a double boiler for 20 minutes, stirring occasionally, until it coats spoon. Remove from heat, and take out one cup of custard. To warm 1 cup of custard, stir in 1½ squares bittersweet chocolate, and beat well as chocolate melts and custard cools. When cool, add 1 teaspoon vanilla extract, then pour mixture into pie crust. Chill.

In a bowl, dissolve gelatin in cold water. Stir in remaining custard, and cool. With mixer, beat