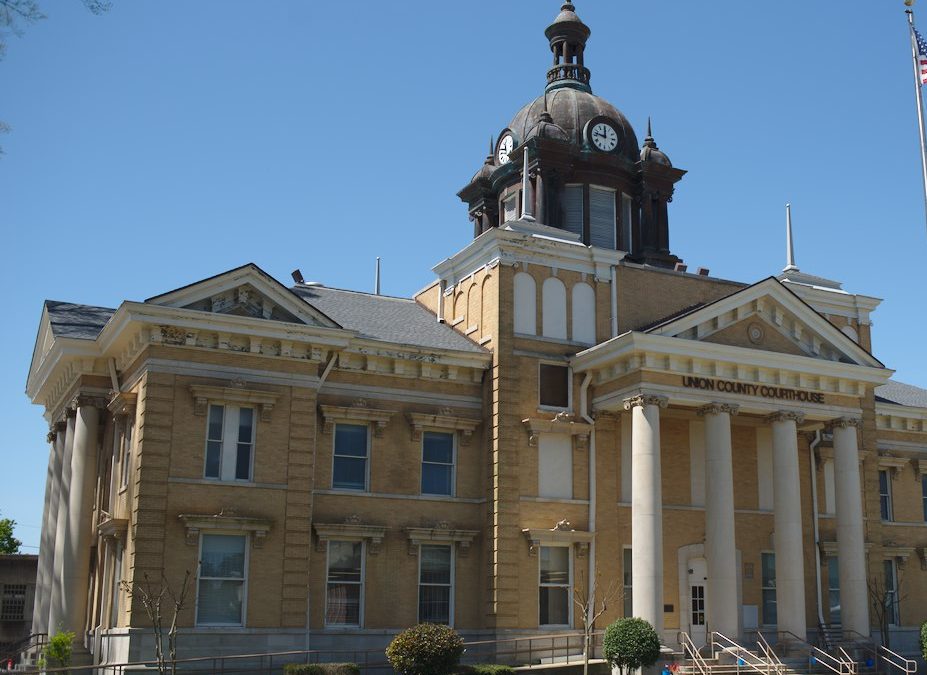 William Faulkner is often associated with Oxford, but his life began in a simple, white clapboard house in New Albany on the corner of Jefferson and Cleveland streets, one of the first homes built on the north side of the town.

The house no longer stands—Faulkner’s parents moved to Oxford after just a year—but Faulkner’s presence seems to linger here. Look up, and you’ll see the writer, gazing down from a water tower; each fall, you can enjoy the literary celebration that is Faulkner Fest.

It’s not surprising, then, that the Union County Heritage Museum turns out to be a must-stop for Faulkner fans. Its galleries offer an excellent history of the region, from its geological beginnings to its modern economy. But the highlight, for me at least, was the Faulkner Garden. Few have as written as evocatively about the natural world as the Nobel-prize winner—and here, on a bright spring morning, a block away from the Faulkner’s birth site, I strolled through a blooming patio, filled with the plants he described, from cotton bolls to honeysuckle. Each planting was accompanied by the writer’s sterling words.

The plaza at Tanglefoot Trail

Faulkner may have retained few memories of his year in New Albany, which he mostly spent in his mother’s lap as she nursed his colic. But in his work, the spirit of the Hill Country is strong. New Albany was a town of small farmers and railroad workers, of cold, winter bird hunts and campfires that echoed with tall, tall tales. In other words, New Albany was populated with the same sort of folks that bustled through Faulkner’s Yoknapatawpha County, his “own little postage stamp of native soil,” as he called his fictional creation.

I was staying at the Concord Inn, in, fittingly, the Faulkner Suite. Just a five-minute drive out of town, the inn set me deep in the pine-studded hills. From the window of the bedroom, I gazed out at cows that happily munched the lawn; from the back patio, I watched the wind rippling across a pond. There were 150 acres of hillside to explore. For those wanting to experience a sense of history fully, the inn includes the Coombs House, a lovingly restored 1867 cabin.

You can still hunt this country, but New Albany’s recent rise as a tourist destination—last year, it was named the best Southern small town by USA Today—is in large part thanks to adventures of a different sort. The Tanglefoot Trail, a 44-mile paved rail trail, opened in 2013, with its northern terminus in downtown New Albany. Here’s another Faulkner connection: the trail follows the path of a rail line that was once owned and operated by the writer’s grandfather. Now, every weekend, you’ll find lots of bike racks affixed to the cars parked downtown—and a whole lot more liveliness in the shops and restaurants.

The trailhead is a plaza, set with picnic tables and strung with lights, that dazzle in the cool blue of twilight. Tired bikers—or those fueling up for the long ride south—will appreciate the presence of AC’s Coffee. The coffee beans are roasted just north of town, at High Point Coffee Roasters, which has been in the business longer than anyone else in the state. The roastery itself is worth a visit for anyone interested in a behind-the-scenes glimpse of how high-quality coffee is made. In the afternoons, the rich smell of garlic wafts from the kitchen of Ciao Chow, an Italian-by-Southern restaurant, housed in an old drug store next to the plaza. The restaurant opened in 2012, when its owners, Tim Satterfield and Mike Carroll, were lured by the soon-to-open trail. The pair travels to Rome twice a year to scout new recipes.

Beyond the plaza, dining options abound, including massive steaks and burgers at Gonzo’s Grill; short-order classics from Game Tyme; and Tallahatchie Gourmet, a local favorite serving up fresh fare with a Creole twist. The Vintage Market has an old-fashioned soda fountain and rave-worthy chicken salad; Latham’s Hamburger Inn, built into an old, bricked-in alley, serves up a mean, Hill Country-style doughburger, topped in the classic style with mustard, pickle, and onions. No stop in New Albany would be complete without a visit to Sugaree’s Bakery, which has been serving small-batch baked goods for more than 20 years—and where I treated myself to a miniature chocolate-meringue pie.

But for my big meal, I decided to dine at the town’s latest addition, The Rainey, which is known for modern Southern fare and fresh-mixed cocktails (and mocktails). It’s the sort of place where you can tell your server your tastes and leave your order to their discretion. Which worked out for me. My pork chop came thick and juicy, bursting with the sweet-savory tang of mango-pepper jelly.

After all that eating, I made sure to get up early the next morning and tackle the Tanglefoot Trail. A mile from downtown, the homes and highways were replaced by the quiet comfort of the woods—which were bright green and blooming, the creeks burbling as I dashed across a series of trestle bridges. Before this was a rail line, it was an Indian trail; south of town, the trail passes the Ingomar Mounds, which were first occupied nearly 2,000 years ago. The Smithsonian excavated the site in the 1880s, and the artifacts they uncovered help us understand the long human history of the region. As I stood atop the central mound in the morning stillness, I felt the tug of that connection, the knowledge that I walked ground that had so long been known. Faulkner, by the way, also wrote about such mounds.

New Albany was sited at an old Chickasaw crossing of the Tallahatchie River. Once the territory was opened to settlement, a ferry was established here, and in 1840, a small village sprang up along the banks. That grew, eventually, into this bustling little frontier town.

Almost every storefront is occupied, I found, and everywhere I stopped seemed to be hopping with shoppers. I’m not surprised; there are, after all, plenty of options to peruse: from the elegant and contemporary styles for women at Runway Boutique to sporty attire at the Bead Shack to endless upscale gifts at the Calico Mushroom. The downtown is listed on the National Register of Historic Places, and my stroll through made clear why: brick storefronts, topped with decorated parapets, have been carefully maintained, still holding their late-19th and early-20th-century flair.

The Tallahatchie eventually joins the Yalobusha, and the two together form the Yazoo, which flows into the Mississippi. By this route, New Albany’s first planters could carry their cotton to market in New Orleans. Then they’d return upriver, stopping in Memphis to finish the journey in wagons.

These days, the river is lined by a pleasant park. On Thursday afternoons all summer, vendors gather here for the lively Biscuits & Jam Farmers’ Market. The town’s premier event, the Tallahatchie River Fest, with its street market and big-name bands, is slated for the weekend of September 28.

After my run, as I rolled back into the hills for my Southern breakfast of bacon and grits and eggs at the inn, I noticed a mural that someone had painted on their fence. Faulkner’s visage mused thoughtfully against a rainbow backdrop. The wall featured a Faulkner quote, too, a fitting inspiration for my Hill Country rambles: “Wonder,” it said, quoting a line from The Sound and the Fury. “Go on and wonder.” In New Albany, it’s easy to do just that.