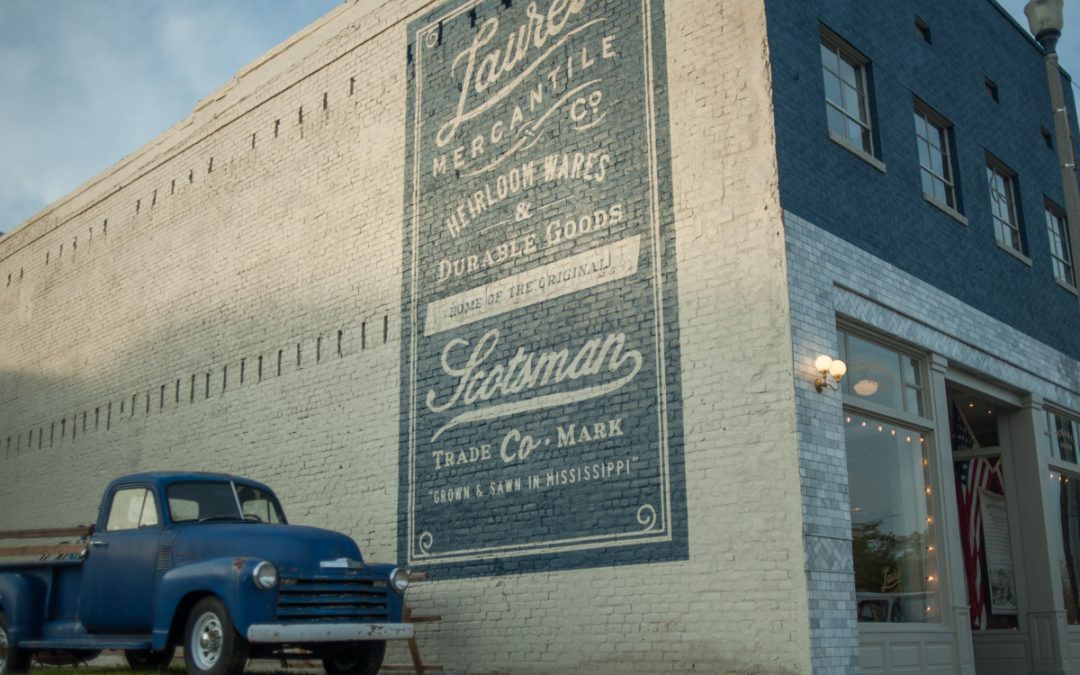 Someone, somewhere in Laurel, is at work right now, that is, even as you read these words.

It may be a contractor, tearing down old drywall in a soon-to-open boutique downtown, or maybe the town’s second-generation sign-painter—whose identity I swore to locals I’d keep secret, so he does not get poached away—is carefully hand-lettering a façade. Or, as when I visited early this spring, maybe upholsterer Tommy Sherrell is in his downtown workroom, carefully applying welting to the bottom of a bench. “This is a dying art,” Sherrell says.  “People just don’t want to take the time to learn.”

But in Laurel, the old ways of small-town living continue. You may have seen the town this spring, flickering on your television on “Home Town,” the new reality show on HGTV that follows local couple Erin and Ben Napier as they assist their neighbors with restoration projects. The show has brought attention to the town’s historic beauty—booming with timber wealth in the early 20th century, Laurel exemplifies the aesthetics of the City Beautiful movement and its exciting new energy. But Ben is quick to point out that Laurel’s was not an overnight success, inspired by the television glow. “Laurel has been working for this for 10 years,” he says. “We’re just beginning to see the fruits of our labor.”
(continued below gallery)

George Bassi, director of the Lauren Rogers Museum of Art

Slowboat Brewing Company is owned by Carrie and Kenny Mann

I’d last visited Laurel five years ago and remembered Magnolia Street as nearly empty. Now, on just one section of one block, there was J. Parker Reclaimed, selling furniture built from locally salvaged wood, next door to Adam Trest Home, a one-of-a-kind boutique where its namesake illustrator sells antiques, including furniture whose upholstery features his designs. Sherrell, whose workshop is on the second floor of Trest’s store, was preparing the leather benches that are now installed in the Pearl Diner, the town’s newest eatery, located another two doors down. Across the street, heavy equipment was parked, ready to continue the overhaul.

It’s not been long since downtown Laurel had a grim reputation. When James Johnson-Hill arrived from California in 2009 with the wild dream of planting an integrated church in his grandfather’s hometown, people told him he was crazy for choosing to build downtown. Even he knew it would be a challenge. “The building looked like a haunted house,” he says, of the former Woolworth’s location that now houses his church. “It was horrible.” But when people told him downtown was dangerous, he scoffed. How can that be, he remembers thinking—when there is never anyone downtown?

That same year, Lee’s Coffee and Tea opened in an old Sears store; a year later, Johnson-Hill successfully opened Agape Church. The church owned another downtown property, which Johnson-Hill painted pastel blue—which inspired neighbors to paint, too. Suddenly there was a rippling wave of new façades and way-finding signs and planters with flowers. Often the approach was to act first, and apologize later—though apologies were rarely needed.

Now, in the 10 years since the launch of Laurel Main Street, more than 50 businesses have opened. There is a new wave of downtown apartments, which rarely bother to advertise their openings—after all, there’s already a waiting list. Erin and Ben Napier lived in one—deciding that, if they were going to settle in Erin’s small hometown after college, they’d still live the way they would in a big city. Now, like many in town, they’ve moved into one of the many historic homes downtown.

“I don’t know why anyone would choose to just scrape by [in a big city] when you can have this,” Erin says. She and Ben stand inside their own new business, Laurel Mercantile, which offers stylish handmade goods and an emphasis on products that are Mississippi-made. “We get to live the dream—because we live in Mississippi,” Erin adds. And Mississippians will have the opportunity to meet the Napiers first hand as they will be feature guests at Mississippi Magazine’s first annual Mercantile of Mississippi to be held May 5-6 at the convention center in Jackson.

And Laurel is an ideal travel destination for Mississippians who have stylish home-owning dreams of their own: its new stores have a real emphasis on homeware and furniture, particularly in shabby-chic and vintage styles. The third weekend of each month is a particularly good time for a visit, as the Rusty Chandelier opens—an “occasional” market of vintage goods that is familiar to viewers of Home Town. This month, its owner, Tana Henderson, expanded into a six-days-a-week store downtown, called the Laurel Leaf. Don’t expect to leave empty-handed. “We always say, ‘Bring a truck, a trailer, and a tie-down,’” Henderson says. Laurel’s shopping and history cannot be mentioned without including Lott Furniture Co.—the store has held court on Front Street for 100 years and has played an important role downtown.

The history of this small town is different than most. As late as 1880, there was nothing here but pine forests—but that changed quickly after the first railroads cut through. In 1893, a set of pine barons moved down from Iowa and opened the Eastman-Gardiner mill, and over the next 21 years, three other major mills were built. At its peak around World War I, Laurel was known as the “yellow-pine capital of the world,” and shipped over a million board-feet of wood each day—more than anywhere else in the world. The resulting wealth led to the construction of one of the finest collection of early 20th-century homes in the state, if not the country, featuring a great smorgasbord of architectural styles.

“That’s really what’s so good about this town,” George Bassi says. “It’s such randomness.” Bassi, who is the director of the Lauren Rogers Museum of Art, means the architecture—but the description could apply to the town’s culture more broadly. He notes that the early timber barons were devoted to building a strong middle class, and built the state’s first high school for African-American students—illegal at the time, so it was called a “vocational school.” They also offered the first kindergarten classes. The town remains staunchly blue-collar today, and happily diverse. I stopped in at Julia’s Bakery, for example, one of the businesses that cater to the Laurel’s growing Latino population. An oilman sitting in the booth next to me listed the many backroad eateries he frequented. Julia’s, he said, was a favorite because nowhere else could he get such authentic Mexican food. Indeed; these were, by my reckoning, some of the best tacos in the state.

The museum, meanwhile (which offers a guide to the town’s architectural highlights) showcases the early timber barons’ commitment to high culture. It’s a memorial to a lost son: Lauren Rogers was a 23-year-old timber heir, just married in 1921 when he died from complications resulting from appendicitis. He had been building a home, and atop the unfinished foundations his parents built the museum. Per their wishes, the museum has never charged an admission fee. Its collection, which includes an extensive set of Native American baskets and American masterworks, makes it one of the state’s most valued arts gems.

Which is true of the town itself. I’ll admit my skepticism: reality television sometimes shines up the truth. But in Laurel I found that not only was the energy real, but there was more than can be captured on the flat screen of a TV. So if you’ve been watching, it’s worth clicking off the tube and driving to town. After all, there’s nothing like the real thing.