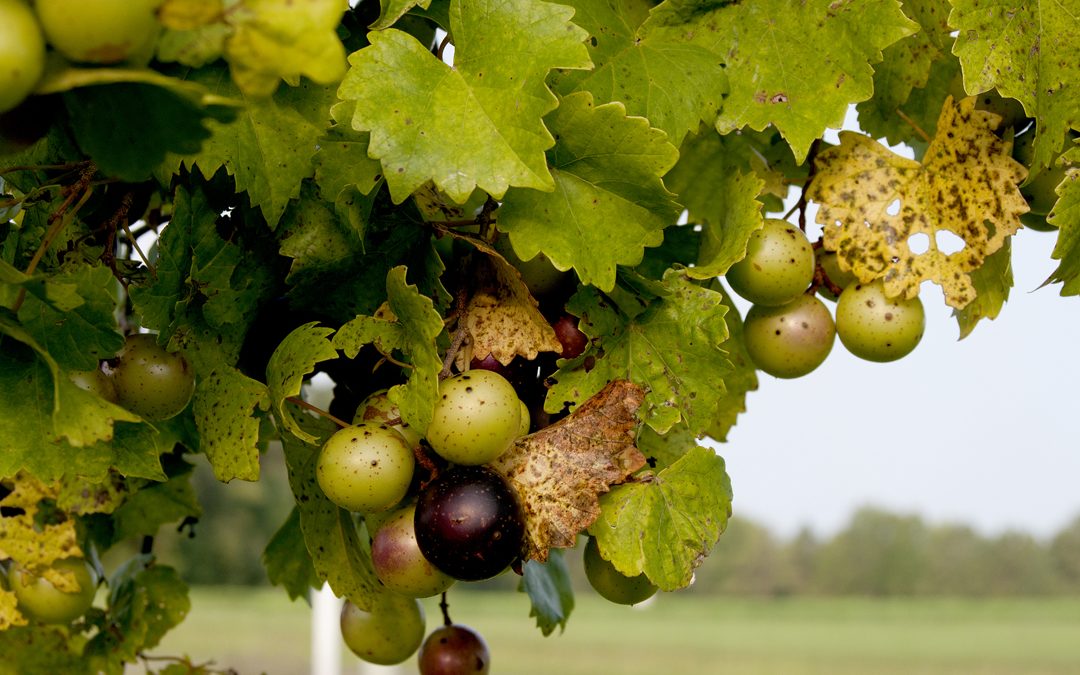 As the poet John Keats once said in his famous “Ode to Autumn,” the months of September and October are indeed “a season of mists and mellow fruitfulness.” The flowers in the garden may be waning, but the woods are sporting their fall colors, and there is respite from the heat of a long Mississippi summer. And the last fruits of the season, arrayed in rich, autumnal hues, are so lovely, one is inspired to pick up an artist’s brush and paint a still life. The more practical minded, of course, may be inspired to make jellies or preserves this time of the year.

When we were a more agrarian society, almost every Mississippi farm had an orchard, and every home had an apple or a pear tree, and almost every arbor, or trellis, or fencerow had a muscadine vine. Muscadines, Vitis rotundifolia, are wild grapes native to the Southeast and indigenous to Mississippi.

In 1584 when English explorer Sir Walter Raleigh arrived in North Carolina, he was quite amazed at the abundance of this wild grape and described it in his journals, and in 1775 noted Philadelphia botanist William Bartram described the muscadine vine and its fruit in his book Travels. And, of course, Thomas Jefferson, America’s founding gardener, grew muscadines at Monticello. And here in Mississippi, its earliest citizens have always appreciated this lovely grape vine with its luscious fruit. Muscadines, often dried as a means of preservation, were a staple of the diet of Native Americans, and the early settlers gathered the berries to make juice, jams, and wine.

For the curious, scuppernongs are a species of muscadine with bronze fruit and were so named because they were found growing along the Scuppernong River in North Carolina. However, muscadines with the deep purple or black fruit are the most common. Both grow well in the Deep South and in Mississippi.

Long ago, some enterprising woodsman, out for a hunt in early fall, noticed the plump, black grapes on the forest floor and marveled at the vigorous vines, laden with fruit, clambering up the tall trees in the deep woods. The woodsman took the muscadine vine home, and thus this native grape was domesticated. Muscadines were the first species of grapes to be cultivated in North America, and today there are numerous cultivars. Adapting well to the old home place, muscadine vines rapidly covered arbors or porch trellises, providing welcome shade in the summer and delicious fruit in the fall. Every pantry had jars of muscadine jelly, and a few less pious folks would clandestinely make a little muscadine wine—for medicinal purposes, of course!

In the wild, muscadine vines, by means of tendrils, can grow 60 to 100 feet high. The leaves are round, serrated, and a glossy dark green. The flowers are small, green, and rather nondescript. In the woods, muscadine vines are often overlooked until the fruit litters the ground in the fall. It is then that one’s eyes are drawn skyward to the vines as they climb the trees towards the sunlight. If you should spot a vine that looks like a muscadine vine but does not produce fruit, it is a male vine. Native muscadines are dioecious, which means that male and female flowers are on separate plants. Naturally, the female vine will be fruit bearing, but in nature, both are necessary.

Muscadine vines are extremely long-lived and can live for generations. These older vines, sometimes called squirrel runners, are exceptionally graceful and dramatic as they climb equally ancient trees. There are some really old muscadine vines at Rowan Oak, William Faulkner’s home in Oxford, and also at historic Waverly Mansion in West Point.