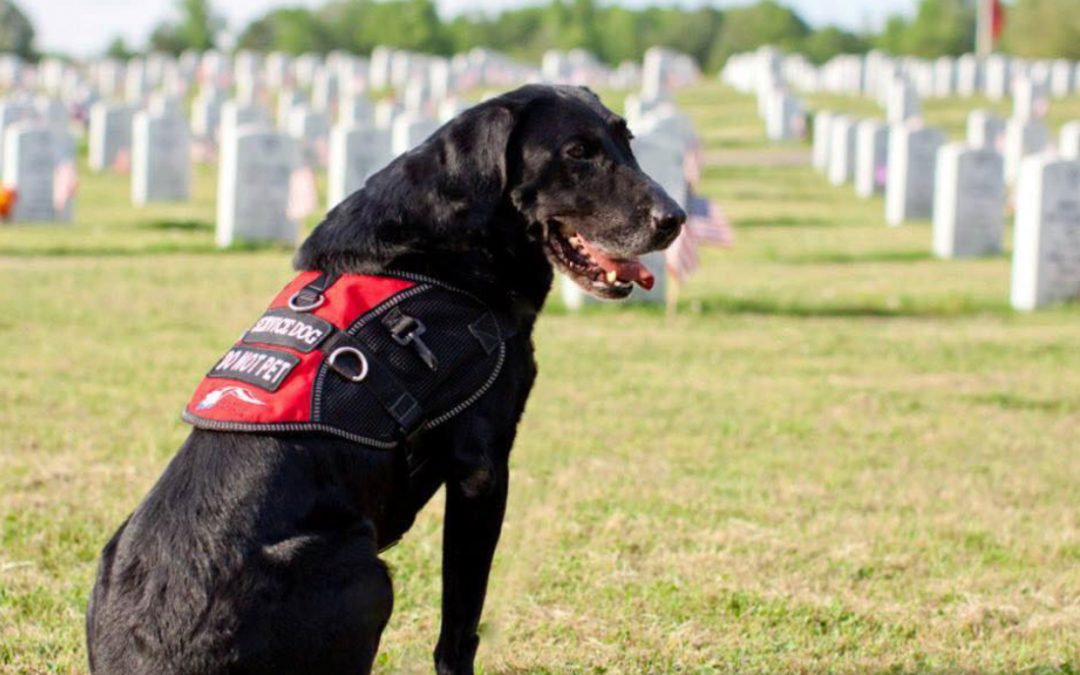 For the brave men and women in uniform, the toughest battles sometimes aren’t sleeping on the rocky ground or getting through basic military training. It is not direct combat, artillery fire, or hot sandy climates. The hardest part for many is returning home. The transition back to everyday civilian life can be difficult, and often can be made even more demanding when dealing with life-changing injuries. A lot of veterans also struggle with Post Traumatic Stress Disorder (PTSD), symptoms that may include anger, severe anxiety, insomnia, nightmares, panic attacks, and flashbacks.

In 2012, Charles Dwyer and Scott Dewey saw a need for trained service dogs, and just as soldiers answer their call to serve, they also answered a call. Retrieving Freedom, Inc. (RFI), a Mississippi-based nonprofit organization based in Senatobia, was born from Dwyer and Dewey’s desire to help. “We first operated out of my house, which was a former gun-dog training facility,” says Dwyer. “It was an easy transition because the facility was already complete; it’s where we trained hunting dogs.” Previously, Dwyer owned Rice Break Retrievers, and Dewey owned River Rock Retrievers.

Together, they combined their training expertise, and today the organization operates two large training facilities—Dwyer runs their new training facility located in Senatobia and Dewey oversees another in Waverly, Iowa. It’s here that RFI specializes in training service dogs for veterans with disabilities and PTSD, diabetic alert dogs for Type 1 diabetics, and autism service dogs for children.

There is no cost to the recipients of the lovable helpers. “We do all of the fundraising,” says Dwyer. “We also apply for grants and take donations, and the participant is asked to assist in fundraising if they can.” The time from application to receipt of the dog can take up to two and a half years. Veterans typically have to have a 60-percent or higher disability rating to qualify, children should have an autism diagnosis from their physician, and people with Type 1 diabetes need medical record verification.

Able has been by Densford’s side through many pivotal moments in his life, including his retirement ceremony from the military

Able also assisted Densford at his graduation from the University of Memphis.

Fundraisers such as the Pheasant Tower Shoot, held on the property, raise funds to support their efforts. Recipients receive RFI-trained dogs at no cost.

Densford has played an active role in educating others about service animals. He spoke at Sacred Heart School along with RFI trainer Kristy Armstrong (right).

With an approximate two-year waiting list, once the application is received and approved, RFI begins preparing the perfect dog for its recipient. Labrador retrievers, golden retrievers, and even a few doodles are part of the training program. Over the course of training, the dogs learn over 50 commands, including household commands such as turning on a light switch, opening the refrigerator, helping with the laundry, opening doors, retrieving fallen or out-of-reach items and prosthetics, and even grocery shopping.

Tyler Densford, a 24-year-old retired U.S. Air Force veteran from Olive Branch, received a yellow lab named Able last October. Densford fell from a Black Hawk helicopter during training and broke his back. “Coming home and coping with an extreme life-altering event was tough,” says Densford. “Able has given me unconditional love that I just can’t explain. He wakes me up every morning with excitement and kisses.” For injured vets, these dogs provide much-needed emotional and physical assistance. “In times when I never wanted to leave my bed, Able gives me a reason to get up.” He adds, “He physically assists in my mobility, and serves as a post for when I fall out of my wheelchair.”

Another recipient, Sergeant Trent Dirks, received his service dog Tracer after being diagnosed with PTSD. “It had been a daily uphill battle since my diagnosis,” says Dirks. “It only seemed to continue getting worse.” Dirks lost two friends to suicide after returning home from service, and for Dirks, “My service dog Tracer has given me the confidence to go to public places again and help keep my mind from thinking of negative things all the time. I have also noticed having a service dog with me all the time has helped boost my spirits and returned happiness to my life again.”

Besides emotional support, PTSD service dogs can do many other tasks. If a veteran has a nightmare in the middle of the night, their service dog is trained to turn on the lights and lay on their owner’s chest, helping to calm them down and interrupt the night terror.

RFI’s diabetic alert dogs are trained to smell a specific scent the body releases when blood sugar levels are too high or too low. Natali Young, who has Type 1 diabetes and hyperglycemia unawareness, received her golden retriever Ruby to help monitor when her blood glucose levels drop. “I spend every moment with Ruby. She helps by alerting me so I can handle the situation,” she says. “I can see the concern in her face.  She will continuously paw, then paw harder and stare at me as if speaking to me ‘Fix it!’”

Autism service dogs are trained and matched to a specific child. It is estimated that 1 in 68 children in America have a form of autism, and these dogs can help calm the child, provide much-needed comfort, and improve social skills. They can also track children if separated, and provide a tether. Rex is the golden retriever improving life in the Growden family. Rex belongs to their autistic son Jaxon. His mom says, “Not only is Rex an amazing tool to help me manage Jaxon in public, but most importantly, he is the vessel to help me with Jaxon at home. Jaxon hasn’t connected well, but with Rex, he has a companion, a best friend, and a bridge to help establish other relationships outside of his world.”

Service dogs are 24-hours-a-day, seven-days-a-week battle buddies, companions, and friends. For Dwyer the reward is simple: “Being able to see families function together as a family again is incredible. PTSD and autism have residual affects on loved ones and friends. Being able to provide a highly skilled, non-judgmental constant companion that can not only change the life of the recipient but the lives of the entire family is very cool!”